Home / About TDB / About Chairperson 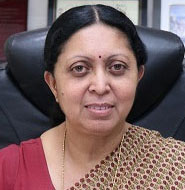 Dr Renu Swarup is presently Secretary, DST (Additional Charge) & DBT. She also holds the position of Chairperson, Technology Development Board (TDB), a statutory body of Government of India functioning under Department of Science of Technology which provides financial assistance to companies for commercialization of indigenous technologies and adaptation of imported technologies for wider domestic applications.

A PhD in Genetics and Plant Breeding, Dr. Renu Swarup completed her Post Doctoral at The John Innes Centre, Norwich UK, under Commonwealth Scholarship and returned to India to take up the assignment of a Science Manager in the Department of Biotechnology, Ministry of Science and Technology, GoI, in 1989. As a Science Manager issues related to policy planning and implementation were a part of her assignment. She was actively engaged as the convenor in formulation of National Biotechnology Vision and Strategy in 2001, 2007 and 2015.

Dr. Renu Swarup has been instrumental in the planning and implementation of some major National programmes such as Spatial Characterization of Biodiversity, Second Generation Bioethanol, Drugs from Microbes, National Biopharma Mission, Antimicrobial Resistance, Genome India to name a few. She was also a member of the Task Force on Women in Science constituted by the Scientific Advisory Committee to the Prime Minister.

A Fellow of the National Academy of Sciences (NASI) India, A Life Member of Trust for Advancement of Agricultural Sciences (TAAS) and a Member of the Organization for Women in Science for the Developing World (OWSD), she was awarded the “BioSpectrum Person of the Year Award” in 2012. “National Entrepreneurship Awards 2017”, TiE WomENABLER Award 2018, “Dr. P. Sheel Memorial Lecture Award” 2018 by NASI and the TWAS Regional Office Prize on Science Diplomacy in 2018. She has been awarded the Agriculture Research Leadership Award 2019.